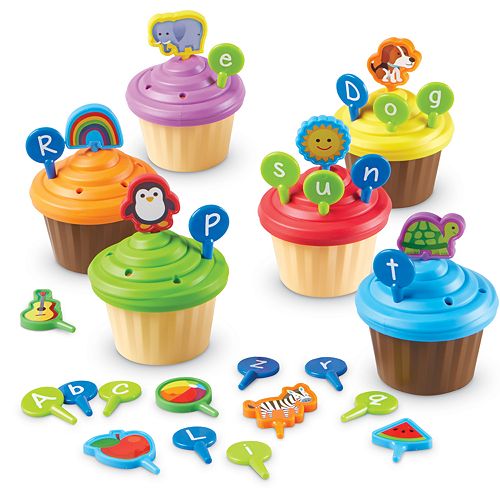 Turn learning the ABCs into a treat-filled party! Kids learn alphabet and early language skills at every tea party with the ABC Party Cupcake Toppers from Learning Resources. This set's six pretend cupcakes come ready to decorate with 56 letter and picture toppers that help kids work on learning the alphabet, mastering beginning sounds, building vocabulary skills, and more. ABC Party Cupcake Toppers support open-ended play - match the toppers to their starting letters, explore the difference between upper and lowercase letters, or consult the online word list for a guide to spelling simple two- and three-letter words! Toppers double as fun cupcake decorations, and add imaginative treat games of pretend or tea parties for imaginary friends! When playtime ends, the toy cupcakes reveal their neatest trick yet: all 56 toppers store inside the 6 cupcake bases, turning cleanup from a chore to a delight.